Podostemum ceratophyllum, or Hornleaf Riverweed, is the only really good example in Connecticut of a flowering plant that is a rheophyte. Rheophytes are aquatic plants that exclusively live attached to rocks in rapids or waterfalls, in clean, violently fast-moving water. This almost absurdly specialized ecological niche is occupied by species in various unrelated plant families, included a couple of tropical species of Utricularia, the carnivorous bladderworts, but the most diverse family that is exclusively rheophytic is the Podostemaceae.

The Podostemaceae are peculiar things, with a morphology that is difficult to interpret, involving a certain degree of ambiguity between the three classical types of plant organ: roots, stems and leaves. A green, photosynthetic, creeping holdfast-type organ grips the rocks on which the plants grow, and in Podostemum and most other genera this is root tissue (some of the research establishing the homology of Podostemum holdfasts was conducted by UConn's own Tom Philbrick). The roots give rise internally to root born shoots, which bear what are probably leaves (but may be in some cases leaf-like stems) as well as the flowers. The structural oddity of riverweeds, presumably resulting from adaptations to their extreme environment, has also historically made the relationships of the family difficult to determine. Modern molecular evolutionary work seems to have finally placed the Podostemaceae firmly within the order Malpighiales, closely related to the Hypericaceae (Saint John's Wort family).

The riverweeds flower and fruit during periods of low water, when the plants are exposed to air. In New England, flowering season is late summer, when there is often something of a drought and the rivers are at their lowest ebb. The flowers are small and non-showy, and probably self-pollinated or wind-pollinated. The fruits are little dry capsules that look quite a bit like moss sporangia (spore capsules). The seeds are sticky when wet, and able to glue themselves to rocks so that they stay in place when their habitat is flooded again.

Podostemum ceratophyllum only grows in certain special sites, not only needing rock submerged in clean, cool, well-aerated, swiftly flowing water, but also being restricted to exposed, sunny stretches of river. It is apparently a species in decline as a result of development and agricultural runoff, vulnerable especially to sediment and nutrient pollution in its water. One of the  local riverweed sites on the Natchaug River in Chaplin is still extant, but the plants don't seem to be as abundant or healthy as they were 30 years ago, when I was first shown the spot.

Various people have attempted to cultivate Podostemum and other riverweeds, as far as I know without any long term success. Plants on cobbles moved to aquariums with vigorous aeration and water circulation will languish for a few weeks, then decline and disappear. Seeds have been germinated in artificial conditions, but the seedlings don't seem to persist. It should be possible to grow Podostemum from seed to seed indoors, but it would perhaps require more attention to light, water movement, temperature and water chemistry than anyone has been willing to lavish on a river weed up to this point.

Comet NEOWISE has been pretty easily visible over the past 10 days in Connecticut, whenever the weather has cooperated. It's now appearing in the evenings, around 10:00 PM, in the northwest sky between the Big Dipper and the horizon. The comet was visible to the naked eye and beautiful through binoculars a few days ago, but was noticeably smaller and fainter last night, so it may be on the way out after a brief show. This has been the first really good comet viewable from the Northern Hemisphere in quite a long time; the last was Hale-Bopp in 1997. The photo above is the official NASA image, my own attempts at cell phone and point-n-shoot astrophotography were disappointing.

Email ThisBlogThis!Share to TwitterShare to FacebookShare to Pinterest
Labels: astronomy

Much of northeastern Connecticut is underlain by thin soils and washed glacial sands and gravels, derived from nutrient-poor gneisses and other old metamorphic rocks. These poor, acidic subtrates create habitats for a variety of carnivorous plants in local bogs, seeps and ponds.

We have two native sundews in the Quiet Corner. The Round-leaved Sundew, Drosera rotundifolia, is the more frequently encountered species. It usually grows in sphagnum moss in bogs or on the shores of ponds, but sometimes establishes on rotting, soggy conifer logs or sandy seeps. The Spatulate-leaved Sundew, Drosera intermedia, is most often seen in very wet, peaty mud in bogs, and usually not in living sphagnum moss, though it sometimes grows in damp sand or on fallen logs in ponds, alongside D. rotundifolia. Three other species of Drosera occur in New England, but not as far as I know in Connecticut: D. anglica and D. linearis are boreal plants restricted to the far north of the region. Drosera filiformis occured in the past on the coastal plain in southern New England, but seems to have disappeared, outside of several extant populations out on Cape Cod.

Sarracenia purpurea, the Purple Pitcher Plant, is the only member of its genus that is native north of Virginia. There is an old herbarium record of one of the southern species, S. flava, growing naturalized in Mansfield, Connecticut, but have checked the site and there is no sign of anything but the native S. purpurea now. Compared to the local sundews, S. purpurea is much more exacting in its habitat requirements, only occurring in sunny sphagnum bogs or other open sites with live sphagnum moss.


Aquatic bladderworts are the most common and diverse carnivorous plants in northeastern Connecticut, with one or more of about five different Utricularia species being found in just about every lake, pond, kettle hole, sluggish stream or marsh in the area. An agricultural or ornamental pond has to be pretty badly abused before the ubiquitous U. gibba disappears. Utricularia radiata, with its aerial flowering shoots held up by distinctive star-shaped floats, seems to show up mostly in more pristine sites with cleaner water.

It was not much of a winter here in the Northeast, with barely any snow, generally mild temperatures, and as a consequence, a short, early and unproductive maple sugaring season. This has been balanced to a certain extent by the weather since April being mostly colder than average. A couple of weeks ago we even had a chilly, overcast day with on and off snow showers. Nothing accumulated on the ground, but it was the latest snow that I can recall in eastern Connecticut.

Then, yesterday morning, temperatures got down to just above freezing, and there were patches of frost out on the lawn, on lower, open spots. In this area, the official frost danger season lasts until the end of May, and frost is not uncommon until about May 15; in my experience we have light frost in mid-May about every five years. But this is the first time I've actually seen this kind of cold after May 20, and I was scrambling to cover up garden seedlings and bring houseplants indoors the night before.

At this point we seem to be done with the cold, and the weather is rapidly transitioning to summer-like temperatures. The native plants seem mostly unfazed by the late cold snap, with maybe a little burning on the edges of tender fern fronds about the only damage I've seen.
Posted by Matt at 1:19 PM No comments:

Email ThisBlogThis!Share to TwitterShare to FacebookShare to Pinterest
Labels: local, things that grow in my yard, weather 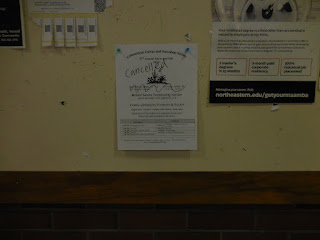 For the past few weeks it seems like I'm spending at least a few minutes each day on email cancelling or indefinitely postponing various talks and meetings. Back in early March, the Connecticut Cactus & Succulent Society held a meeting as scheduled, but there was some talk among the officers about whether future events would have to be shut down because of COVID-19. Now, at the beginning of April, that seems like it was years ago. This month's big cactus annual cactus show is cancelled, of course, and at this point we're hoping to be able to be able to hold one in March 2021. 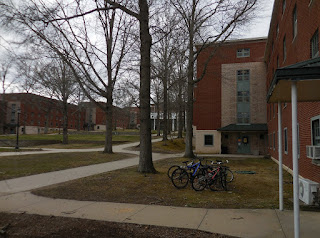 The UConn campus is mostly shut down, with classes finishing out the semester online. I'm still coming in to keep the research and teaching greenhouses operational; fortunately it is easy to maintain appropriate physical distancing, with very few other people on campus at this point.

Spring is underway out in the woods, regardless of the shutting down of so much human activity. I got out for a short hike after work today, and saw that the flowering season had started for a lovely native wildflower, Round-lobed Hepatica. I have been checking in on this particular patch of a dozen hepatica plants for more than 20 years, and it hasn't changed much over the decades; I suspect that the plants are very long-lived. 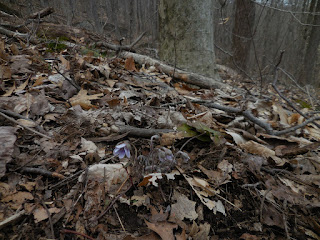 Hepatica americana is in the plant family Ranunculaceae (the buttercup family). Some botanists lump Hepatica into the closely-related genus Anemone; this species would be Anemone americana under that treatment.
Posted by Matt at 7:22 PM No comments: