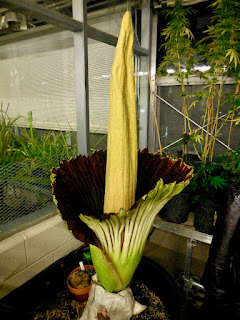 Just in time for Halloween, a Corpse Flower (Amorphophallus titanum) bloomed last night in the greenhouse at Eastern Connecticut State University. The teaching/research greenhouses there are not usually open to the public, but Prof. Bryan Connolly was kind enough to allow people in to see it on a Sunday evening.

Here at UConn Storrs, we have a few A. titanum plants that are getting to be fairly large, but are still immature. It may be a couple of years before we get flowers.

There was a short article about the ECSU Corpse Flower in the Hartford Courant.

It's been terribly windy in eastern Connecticut for the past few days, apparently because of a powerful offshore storm. The worst of the wind was Sunday (May 8 2022), when a good sized Eastern White Pine (Pinus strobus) was blown over in the woods next to my house, falling uncomfortably close to structures, with the tree's top coming right down a stair case and grazing my side door. There wasn't any significant damage, fortunately, though my old pallet-wood compost bin is no longer with us. I wasn't around at the time, but my sweetie says the noise was terrifying and that it briefly looked and sounded like a tornado was going by outside. Strangely, the sky was clear and the sun was out for the whole event. The local weather station recorded 30 mph gusts that day, but this must have been stronger. I'm not even sure what this sort of weather would be called... is a blue-sky microburst a thing?

The tree was actually half of a pine with a forked trunk, which was clearly a weak point. The downed portion has a diameter of about 12 inches. The tree was about 50 years old. It's actually easy to get a more or less exact age for a youngish pine tree like this, without taking a core or cutting a clean section of the base to count rings. A pine branch that is actively growing produces exactly one whorl of new branches at its tip each year. So, you can pick a healthy branch and start counting whorls from the tip back to the trunk, then count whorls of branches down the trunk as far as you can go, and you have the age in years. In older pines the lower, overtopped branches eventually die, fall off, heal over and disappear, but this takes quite a while to happen. For this tree I couldn't find any sign of branch whorls only for the 2-3 feet at the very base, which I would guesstimate took the then-young pine seedling about 5 years to achieve back in the 1970s. (The scars from branch whorls that I can see low on the trunk are far apart, indicating that the tree was growing quickly and the environment must have been much more open and sunny.)

I'm not sure if the remaining half of the pine will survive; possibly not after losing so much of itself and with a big open wound in its trunk. It would probably be a good idea to take the rest of it down, especially if it seems to be in decline this summer.
Posted by Matt at 4:48 PM No comments:

Email ThisBlogThis!Share to TwitterShare to FacebookShare to Pinterest
Labels: local, things that grow in my yard, weather

The Connecticut Cactus & Succulent Society's annual show and sale was held this weekend, for the first time in three years. It was great to see everyone in person again! This was the first convention-type large public event that I've participated in for a while. People generally seemed to be acting responsibly and respectfully, and the two-day show proceeded without any notable hiccups.

The 2022 show was a bit scaled back in most respects, with a rough estimate of visitor numbers being about half of the attendance achieved at shows in the mid-2010s. There weren't as many entries in the judged show, either, and some of the usual volunteers running the show were mostly or entirely absent for various reasons (this last deficit was partially offset by some newer CCSS members stepping up to help). I for one was OK with the 2022 show being a lower-key affair than some of the more hectic pre-pandemic shows; it was a good way to ease back into the show routine. 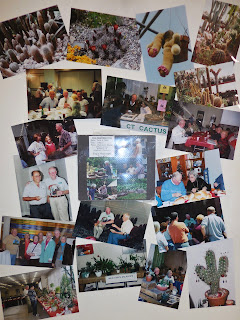 The former cactus show regular whose absence was most missed this year was John Spain, a founding member of the CCSS who passed away at age 100 this winter. John was a pioneer in growing winter-hardy cacti and succulents in cold, humid climates. There was a tribute to John set up in one corner of the show, with photos, newspaper articles and awards from his decades in the cactus club. 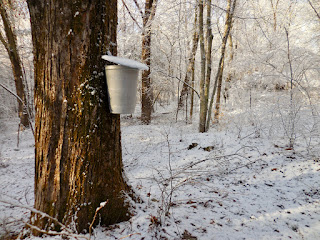 The winter freeze-up was pretty late this year in southern New England, with the real cold holding off until January, but it was actually too cold for much sap flow for a few weeks after the traditional start of maple sugaring season on Valentine's Day, which is a rare occurrence these days. Since the beginning of March temperatures have been more seasonable, with some warm sunny days, some rain and some snow, and the sugar maples have been quite productive. Last week my lone tap produced about 12 gallons of sap, which boiled down to one quart of syrup, for a 48:1 ratio (the ideal ratio usually cited is 40:1).

There is a big winter storm moving through today, with a bit of cold rain, snow and a lot of wind, and the next day or so will provide a good solid freeze to reset the sap flow. Next week is set to be much warmer, with barely any chances for even a light frost at night, so it is possible that the sugaring season will be coming to an end soon. If there are too many days this time of year without frost, or the temperatures get too high, the sap flow stops and the season ends. If that does happen, it will have been a rather poor maple syrup year, starting more slowly due to cold and ending a week or two earlier than usual because of early spring warmth.

For just about 30 years, beginning in April 1972, Connecticut was home to perhaps the world's only museum dedicated to nuts (as in, large, usually edible seeds, with a tough outer shell usually derived from fruit tissue). The Nut Museum was the life's work of eccentric artist Elizabeth Tashjian, who operated it by herself out of the first floor of her home in Old Lyme. Ms Tashjian was hospitalized, comatose, in 2002, and her estate was liquidated on the assumption that she would never recover. That normally would have been the end of a small private museum with a one-person curatorial staff and board, but Connecticut College professor Christopher Steiner managed to acquire and preserve the Nut Museum collection, and has put on occasional public displays of the nuts, artworks and related material in the 20 years since.

The Benton Museum at the University of Connecticut has been hosting the 50th anniversary Nut Museum revival this winter, with an extensive display of Ms Tashjian's paintings, sculpture, ceramics and nut-themed music. Botanical specimens include several Coco de Mer nuts (Lodoicea maldivica, family Arecacae), the largest seeds of any plant, which were apparently a special favorite that appeared repeatedly in her artwork. The current display also includes a re-creation of the main gallery of the Nut Museum, as it appeared at its zenith in the 1970s.

The Benton Nut Museum exhibit, along with associated talks and films, give a sense of the strangeness, gentle spookiness and humor of the original museum and its proprietor. One strong theme of the display is the experience of a certain generation and class of American women who were emphatically not brought up to be independent, but who nonetheless made a place for themselves in the world on their own. Another theme is the failure of society to compassionately deal with elderly people with no family and little means of support. The story of the Nut Museum ends on a hopeful note: Elizabeth Tashjian made an unexpected recovery from her medical crisis, and lived another five years at an eldercare facility where she seemed reasonably happy. Although she never returned to her house, she was grateful that the contents of the Nut Museum had been saved, and she was able to preside over several of the early post-Museum exhibits of the collection.

Prof. Steiner is currently researching and writing a book about Elizabeth Tashjian and the Nut Museum. Publication sounds like it may be a couple of years off.